-
Posted by Michael Novakhov (Mike Nova) at 9:14 PM No comments:

Clinton scare shakes up the race - POLITICO
9/11 memorial events in New York City, Washington, Pennsylvania - CNN.com
hillary clinton - Google Search
Hillary Clinton’s health just became a real issue in the presidential campaign - The Washington Post
Current News: M.N.: Hillary is the archetypal image of the Mother and Grandmother to the Nation and to the World

News Reviews and Opinions: "Mr. Trump seems to suffer from a manufacturing defect." - The Selling of Donald J. Trump - NYT | "No wonder Putin, covert manipulator of the West, smirks." - » For Russia, Donald Trump is a dream come true 10/09/16 08:49 from Mike Nova's Shared Newslinks
News Reviews and Opinions: The personal health of the candidates as the Presidential Elections - 2016 issue : "Americans need to know more..."

Posted by Michael Novakhov (Mike Nova) at 2:42 PM No comments:

Restoring The Trust: Russification Of The West or Westernization Of Russia? - "[Mr. Putin] is on the lookout for levers to weaken Europe's ties with the US, our correspondent says, in the hope of one day turning Russia into Europe's main strategic partner." - Russia security paper designates Nato as threat - BBC News

M.N.: There is nothing particularly new in those news about the "Russian National Security Strategy" signed by Mr. Putin on the last day of 2015. It is the reiteration of the previous documents, most notably the military doctrine of 2014 and most importantly, it is the reiteration of contemporary thinking of the Russian leadership and security establishment about Russia's place in the world and the threats, real and imaginary, current and potential, that, in their minds, Russia is facing.
How much of this is a sober assessment and how much is a political paranoia?
The exact ratio is hard to determine, but it definitely is a mix.
It might be useful to separate the unhealthy and excessive suspicions, which is a burdening baggage from the times past and long gone (we all might have certain nostalgic troubles parting with our old baggage) from reality.
Basically, to put it in plain language, this "strategy" comes down to:
"We do not trust you. You are out to get us. You are getting closer and closer to our borders. But we will defend ourselves and we are able to do it."
Mr. Patrushev, current secretary of the Russian Security Council, stated many times that the West and the U.S. in particular are out to dismember Russia and to take her natural resources.
Guys, the "healthy competition" between the states, as the U.S. politicians like to say, is the way of life. But no one is out to get you, no plans and no particular desire to do this, as I see the situation. No gain in it. No need for it. Certainly, it is not worth a war, especially the nuclear war. Natural resources can always be bought, and, in our days, relatively easily. Territories and foreign populace can be more of a burden than a boon, that's how the empires crumble.
Frankly, many people, myself included would prefer to see Russia smaller, less unjustifiably ambitious, less threatening and less aggressive. But preferences are not easily translatable into realities, and there is always costs/benefits ratio. Things tend to resolve on their own, history takes its course, everything eventually falls into a place like pieces in a kaleidoscope.
There is another part in these preferences. Many people, myself very much included, want to see Russia as a part of the Western world (for the lack of a better, more encompassing term), a part of the Western culture and a part of the Western alliance, and, yes, eventually a member of NATO.
Tall order. But not inconceivable. Many obstacles have to be overcome, many issues have to be resolved. The main among them is the mutual trust.
Mr. Putin, restore the trust!
That's what my little old cerebellum tells me.
In his New Year greeting to President Obama Mr. Putin correctly describes the significance and potential benefits of closer U.S. - Russia relations: the two countries are the key factors of insuring the world security and their "constructive dialogue and cooperation could be an effective deterrent to the new challenges and threats".
What is missing is the great intangible: the mutual trust which was squandered and almost destroyed lately. Relations between the countries are not unlike interpersonal relations: it takes years to build trust and it might take just one phrase or action to destroy it.
And these phrases and actions were aplenty: annexation of Crimea and the war in Eastern Ukraine, whatever their historical and ethnic background and circumstances, contradict the common sense of fairness and fair play, at least in Western perceptions; "saber rattling" and talk about the possible use of nuclear weapons, which could not be seen as something other than a "nuclear blackmail"; numerous, persistent violations of airspace, etc., etc.
Russian economy is in dire straits and on the brink of collapse, mass poverty, and social unrest may be looming on the horizon; the patience of Russian people is legendary but not endless.
Why don't you consider some simple but bold and straightforward steps?


Could US and Russia Enhance Intel Relationship? Yes, they could. And, yes, they should. "The head of the CIA is "determined" to keep conversations open between the intelligence communities of the United States and Russia and wants to see relations between the two nations "enhanced"..." The "healthy", and probably some not so healthy competition will remain (the girls always want to have some fun and they get boisterous at times), it would be idiotic not to admit this, but the healthy cooperation must start, also in honest, gradually, steadily, with many checks and balances, and eventually the cooperation component should prevail. I do not have any special or professional knowledge, expertise or experience in this area and I would never think that I would come to this thought, but I did, and it felt like a revelation. The intelligence relationship aspect is the inseparable and vital part of general relationship between countries.

All this might sound more idealistic than realistic. Take it as a food for thought, and maybe as a food for fantasies. "Imagination rules the world, a leader is a dealer in hope." And, at the same time, "never interrupt your enemy when he is making a mistake". But sometimes, counter-intuitively, paradoxically, we do. Out of compassion, out of humanity? And keep in mind that more likely than not, it will not be appreciated and will be turned against you.
Are Russians our enemies? Definitely not. Rivals? Frenemies? Hard to say, cannot be defined in one word.
Is Putin our enemy? Not really, but he does not like us. He distrusts the West and America especially.
I would venture my advice to him: "Volodya, take two weeks of vacation and travel across America, meet the people, both politicians and ordinary people, of all walks of life. Get a feel of what the country is about: complex, incredibly complex but strong and really free. You will love the country and you will love the people."

For Russia, all this comes down to and is a part of general issues and questions, not unique to her but particularly acute at this stage and at this time: the issues of national identity, place and role in the world, alliances, rivalries, competitions and cooperation.

Russification Of The West or Westernization Of Russia?
Russification of Europe or Europeanisation of Russia?
Eurasianisation of Europe or Europeanisation of Eurasia?
These are the false dilemmas and false formulations.
The process of integration which appears and is as inevitable as it is quite protracted and painful, is much more complex than this simple or oversimplified formula.
This historical process has to be analyzed and understood.
The concept of dominant culture, the European, the Western, the Judeo-Christian culture in this case might be a key to this understanding. The reality is complicated further by the emerging issues of ethnic, racial and religious, within and outside the realm of Abrahamic religions, interactions and integration, by the contradictory and conflict ridden processes of social, religious and cultural integration and globalization.
For Russia, it would be a great mistake to try to drive a wedge between Europe and the U.S. and to try to exclude the U.S. from this process, as it is evident from her recent (within last 10 - 15 years, although this tradition goes further back) policies and foreign policy thinking, influenced by her renewed nationalism. It will be impossible and counterproductive. This strategy stems from insecurity and continuing imperial ambitions of territorial domination, which simply do not work in today's globalized world with the primary role of financial capital component in modern economies. Investments, not the territories are the key to social and economic development. Financial flows, not the flows of armies and arms determine the success and progress. Hence the new role of soft powers of economic warfare and economic sanctions, with all their inherent limitations.

The BBC's Diplomatic Correspondent Bridget Kendall says that Mr Putin is determined through his interventions in Syria and Ukraine to wield his country's military clout, so that the world in general and the United States in particular realise that Russia is an equal partner whose interests must be accommodated.
Our correspondent says Mr Putin wants the West to acknowledge Russia's right to treat its post-Soviet neighbours as part of its sphere of influence, free from links to Nato or any other Western-dominated alliance.
He is on the lookout for levers to weaken Europe's ties with the US, our correspondent says, in the hope of one day turning Russia into Europe's main strategic partner. 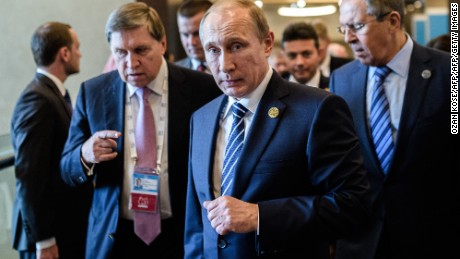 Posted by Michael Novakhov (Mike Nova) at 8:44 AM 2 comments:

-
Posted by Michael Novakhov (Mike Nova) at 8:43 AM No comments: